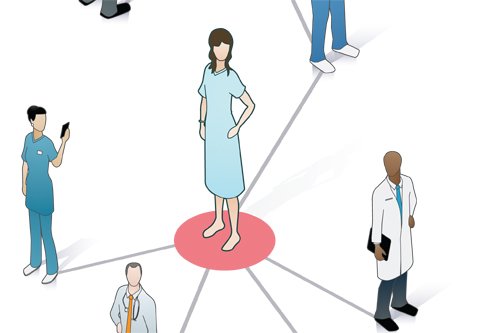 "Patient Centricity" is Quite the Buzz Word the days

Ok, we've always talked about it. After all, Pharma makes its medications to serve the patient population. We make their lives better, we save lives. But for a very long time, the conversation about treatment was mainly with HCPs. They were at the center of the healthcare universe. They made decisions about the right ways to treat patients. If there was a variety of medications to choose among, they would make the right decisions. Marketing was left mainly to the salesforce, patients were in the passenger seat or often in the backseat.

In the most simple definition, "Patient Centricity" means that we place much greater focus on their needs.  We listen to their voices.

Over the years, research in the Pharma category tended to emphasize message development for doctors.  What message was most compelling to them in consideration of a particular brand?  We are currently learning that while messaging to doctors is important, strong patient marketing in some categories can potentially be even more important.  In many condition areas, patients are moving into the passenger seat and even driving the conversation around treatment.  And it is critical to note, when a patient expresses a preference for a type or brand of medication for their condition, unless there is a compelling contrary reason, they will nearly always get it.

This started with NEXIUM and PREVACID

Patient centricity and brand marketing can be traced back to PROZAC and PRILOSEC.  PRILOSEC came out in 1989 and was promoted by strong patient marketing. Patients paid attention. Then PREVACID was launched in 1995. The battle ensued. Who would win? In 2001 PRILOSEC was going off patent and there was general fear at AstraZeneca. How could it maintain the substantial momentum it achieved with the marvelous "purple pill?" The answer, call it the "new" purple pill. Suggest to patients that they should ask about this new solution, NEXIUM, that was the child of PRILOSEC. This idea worked like a charm. PREVACID fought hard to win the hearts and minds of patients, but it was behind in the game. And, NEXIUM was willing to commit massive amounts of budget to DTC marketing. So while PREVACID did fine, NEXIUM won the war. That was the early days of "patient centricity" where the patient voice really mattered.

DTC marketing was born. A long list of brands followed the lead of NEXIUM: BONIVA, RESTASIS, LIPITOR, CRESTOR, PLAVIX, CIALIS, CYMBALTA, VIAGRA, SYMBICORT and it goes on and on. In those days, most DTC advertising was concentrating on medications that treat large populations. And the obvious channel was TV. With huge potential and large marketing budgets, Pharma blitzed the world of patient treatment. Changing the way that we think about medical areas such as depression, diabetes and erectile dysfunction. To all the pundits who criticize DTC advertising, we say "take a look at what we achieved! We changed the dialogue around conditions that really matter. It changed the lives for many patients, improving their healthcare treatment.

With little consideration of the benefits provided by DTC marketing, it was attacked from many sides.  At one conference I was harassed by Ralph Nader for my participation in this marketing. I could only say, "shame on you Mr. Nader". I brought the ED example up in the debate, how it shifted public dialogue around that condition.  He did not have much to say about it.  Do your homework Mr. Nader and see all the good that we have accomplished.

DTC Marketing Allows Us to Speak with Patients?

At its best, DTC marketing understands patient needs and communicates information that will facilitate discussions with a doctor.  Patients “ask their doctor” about a condition or a specific medicine after they’ve seen ads for a prescription drug on TV or online.

A study conducted by DRG research found that among patients who saw digital ads for drugs, 42% requested a specific prescription from their doctors, while 22% of people who saw TV ads did the same. Another study conducted by Wharton and University of Southern California professors, estimated that for every 10% increase in advertising exposure, there was a corresponding increase in the number of prescriptions purchased by about 5%.

However, this leads to the downside of DTC Marketing.  Used poorly (or to manipulate) this marketing is not "patient centric".  Instead it places profits ahead of the needs of patients.  While profitability is the goal of all Pharma companies, the objective of this marketing should always be to meet true patient needs.  Otherwise, it will justify the complaints of pundits like Mr. Nader.

So How Is DTC Marketing Changing?

For example, we are starting to see advertising for conditions like MS. KESIMPTA and OCREVUS are on TV. They launched advertising to draw attention to this condition that often is kept in the shadows. The OCREVUS’ campaign, “Dear MS,” has been running on and off since September 2019 with $140 million spent to date on national media buys, according to data from real-time TV ad tracker iSpot.tv. The KESIMPTA “Dramatic Results, Less Drama” commercial began in January, spending $7.4 million in its initial month. These ads humanize the lives of patients with the condition.  As with earlier. campaigns for Depression, these campaigns can shift social impressions.  This is "patient centric".

"Patient Centricity" humanizes the conditions that affect the patients around us

Great DTC advertising realizes that many people around us are suffering from health conditions that require treatment. A recent study we conducted shows that around half of the US population suffers from at least one chronic disease.  That means in your neighborhood theres a good chance that the family next door has a person that suffers. Perhaps from a condition that is debilitating. Perhaps they are hiding it from those around them. Perhaps they are avoiding treatment for reasons of denial or shame. Diabetes, for example, is an epidemic in our country and it is not well treated. Particularly in areas of Mental Illness, families struggle to find support and may be isolated from their communities.

Shame is often a critical factor affecting these dynamics. As we've done for conditions like Depression and Erectile Dysfunction, we can help to change the discussion around conditions like Diabetes. This can have dramatic effects.

Andrew Thomas, VP for respiratory at GSK recently commented that:  “Historically across pharma, I think we tend to shy away from the reality of what the disease is and focus more on the future. With this campaign, we’re able to show both in an authentic way and relate to the patient and identify that most of these patients are either untreated or undertreated” (FiercePharma).

In market research, patients told GSK they were ashamed that they had smoked and created the COPD burden for themselves. However, they also said they didn’t think any advertising was identifying that it is a smoking-related condition, nor did they see people like themselves in any advertising.

We can offer so many examples, but we'll leave you with two. In recent advertising for smoking cessation, Pfizer featured Ray Liotta speaking about his problem quitting smoking. Smoking cessation drug, CHANTIX, was able to help him with this goal.  In the end, he did it for his family. Because he knows they need him. Sure, Ray is famous and you may think that he did it for the money. But when you watch the commercial, that is not what you feel.  Our research showed that the campaign featuring Liotta was one of the most effective campaigns that year across
ALL categories!

In a similar fashion, GSK did its homework and solved this puzzle. Based on insights from research, advertising for TRELEGY depicted patients in a way that they can get. They understand "patient centricity". They are just like your next door neighbor.